Home • Blog • Ravenstower: The Story behind a Hammersmith icon

Do you know the history of Ravenscourt Square and the Pallenswick Estate?

Two weeks ago, we got the call to view a property on Ravenscourt Square, but little did we know that we were about to value a piece of Hammersmith history.

Since the 1850s, 17 Ravenscourt Square has stood tall and impressive at the edge of Ravenscourt Park, worlds apart from its neighbours. Most residents of Hammersmith will be familiar with its rose-pink façade, but few will know the history of ‘Ravenstower’ or how such a unique Italianate villa came to exist on this patch of West London. 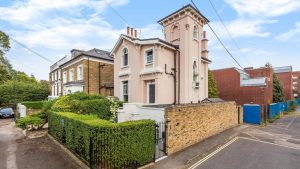 Birth of the Belvedere

The area of Ravenscourt earned its name in 1747 when Thomas Corbett purchased the medieval manor and estate that existed where the park is now, then called ‘The Pallenswick Estate’. The reason for the change in name of the manor house to ‘Ravenscourt House’ was likely due to the Corbett coat of arms featuring a Raven.

When in 1812 the estate was bought by George Scott, a builder who had recently developed St Peter’s Square and was responsible for the building of Black Lion lane and other nearby roads, the estate was greatly expanded. Among the streets of homes that Scott built around the edges of the estate was number 17 Ravenscourt Square, a stunning Italianate Villa nicknamed ‘Ravenstower’ for its distinct pink Belvedere.

Whilst the Ravenscourt manor and estate were lost during the The Blitz, many of Scott’s buildings remain today.

Following years of famous inhabitants (such as West End actor Henry Vincent), scandalous arrests (Frederick Milledge was arrested in the tower) and a family that lived there for forty years, no.17 was finally bought in 2013 where it underwent a major renovation. 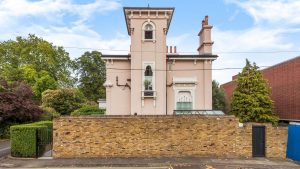 “Renovations took over a year. We commissioned Fariba Pentland from AND architecture to enhance the house’s existing historic features whilst improving the general layout.”

“Following extensive rewiring, plumbing, insulation and roof repairs, we removed the water tank from the belvedere in order to turn it into a secret hideaway. We remodelled the top floor bedrooms and fitted the en-suite bathrooms using historic HE Smith tiles and Drummonds furnishings. We uncovered and reconditioned the original floorboards throughout the house.”

“All fireplaces were reinstated and matching antique marble fireplaces were sourced to replace the substandard reproduction ones which stood in the dinning and sitting rooms. We created a library / snug with a secret door inspired by 19th Century designs.” 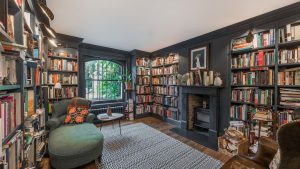 “The guest bedroom was tanked and fitted with an ensuite bathroom. The south facing kitchen/breakfast room was improved by the addition of French windows and a conservatory section, creating a light filled space which is the heart of the house all year round.” 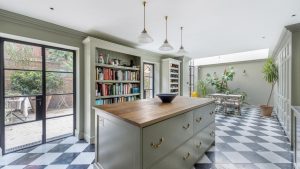 “Outside we repaved the garden with reclaimed Portland stone and built a brick wall at the back using period bricks. The front steps to the house were reconditioned using Portland stone.” 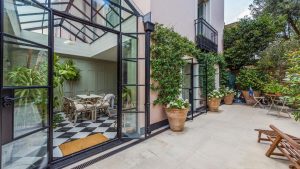 Now, after breathing new life into the Victorian villa they have decided to leave London altogether, but they will miss their little slice of Italy:

“What we will miss the most are the unique features and sense of history of the house. It really has a unique atmosphere. Being on an elevated position on a private road by the park is like living in a peaceful green oasis surrounded by birdsong. A rare treat in London.”

If you’re interested in owning a piece of Hammersmith history, then view the full property details here, or request a viewing by calling Sales Manager Martin Clements MNAEA on 020 8819 0510, or emailing martin@hortonandgarton.co.uk.